Shukratal Yatra and Glories of Srimad-Bhagavatam 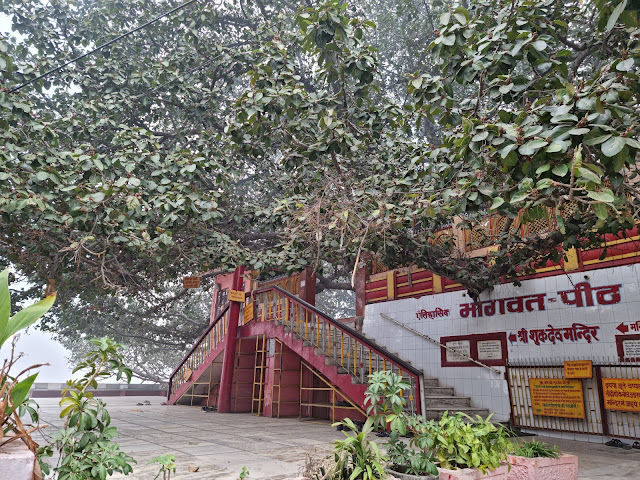 Shukratal is a tiny holy town about 2-3 hours (72 km) from Haridwar on the banks of Ganges River in Muzaffarnagar district of Uttar Pradesh. Srila Sukadeva Goswami spoke sacred Srimad-Bhagavatam (Bhagavata Purana) to Maharaja Pariksit (the grandson of Arjuna and son of Abhimanyu), under a banyan tree 5000 years ago.

Here at a place called Sri Sukadeva Temple, there is a gigantic 5100 year old Banyan tree, also known as Akshaya Vat Vriksha, underneath where Sukadeva Goswami, Maharaja Pariksit and 80,000 sages sat for 7 days continuously hearing Bhagavatam narration. The branches of this Akshaya Vat tree spread far and wide, sprouting through the nearby surroundings. The Sukadeva ashrama is built around the tree.

Under Akshaya tree is a small temple which has the deities of Sukadeva Goswami and Pariksit sitting alongside and their footprints. In the courtyard there is a temple with the exquisitely beautiful deity of Supreme Lord Sri Krishna giving darshan to everyone assembled there after the conclusion of Bhagavatam katha. Uniqueness of this 150 feet towering Akshaya Vat is that it doesn’t shed any of its leaves.

Sukadeva ashrama has a number of small shrines and deities, Yajna shala, Sanskrit Vidyalaya and a reading room. Ashrama also has lecture halls called Srimad Bhagavata Bhavan, for holding continuous discourses on the Bhagavata Purana. Many pilgrims come from across India to attend Bhagavata-katha. There are overnight facilities available to stay at the ashrama that have to be pre-booked. At 12 noon, Prasadam with locally prepared delicacies is served in a hall on the ground-floor of the ashrama near the Akshaya tree.

Across from the tree in another building there is the Samadhi tomb of Swami Kalyandevji Maharaj, who established this Sukadeva Ashrama. Born in 1876, since 1944 he worked with tireless dedication for several decades to bring forth the glories and significance of Shukratal. He lived for 129 years and passed away on 14 July 2004.

At Shukratal there is also the world’s tallest murti of Hanuman Ji at 75 feet high standing outdoors over the main shrine and was built in 1987. Close-by is the Ganges River and the beautiful Shukratal Ghat. There are a number of temples and ashrams in Shukratal and the atmosphere is devotional.

Srila Bhaktisiddhanta Sarasvati Thakura visited Shukratal during his preaching tours as quoted from the following accounts – A Ray of Visnu: “Srila Bhaktisiddhanta Sarasvati later delivered some lectures in Delhi in the latter part of the year and glorified the Srimad-Bhagavatam at Sukara-tala, the place where Sukadeva Gosvami delivered the Bhagavatam to Maharaja Pariksit five thousand years earlier.”

Srimad-Bhagavatam was compiled by Srila Vyasadeva at a cave which is further-up from Badrinath with assistance from Ganesh Ji transcribing this impeccable transcendental literature; Shukratal is where Srila Sukadeva Goswami narrated Srimad-Bhagavatam to Maharaja Pariksit during his last 7 days; and Naimisaranya in Sitapur district of Uttar Pradesh (which is near Lucknow and Kanpur) is where Suta Gosvami spoke the Bhagavatam to the thousands of sages who had gathered there to perform a large ritual for the upliftment of people in Kali-yuga.

Shukratal is serene, peaceful and has a highly potent spiritually surcharging atmosphere full with the sweetness of bhakti (devotion) for Lord Sri Krishna. It is an incredible place to visit given the significance it holds for the sacred text of Srimad-Bhagavatam!

After Bhagavatam was discussed, Sukadeva concluded that for a person who is suffering in the fire of countless miseries and who desires to cross the insurmountable ocean of material existence, there is no vehicle more suitable than cultivating a transcendental taste for the narrations of the pastimes of the Supreme Personality of Godhead, Lord Sri Krishna.

Maharaja Pariksit approached Sukadeva Goswami and offering his most-respectful obeisances and gratitude said: ‘Now I have achieved the purpose of life. You have personally related to me the narration of the Supreme Lord and have revealed to me what is most auspicious ’the knowledge of the supreme personal feature of the Lord. I am now full of transcendental knowledge and self-realization, and my ignorance has been eradicated. I no longer have any fear of Takshaka or any other living being, because I have absorbed myself in the purely spiritual Absolute Truth. Kindly allow me to resign the functions of all my senses unto Lord Adhoksaja (Supreme Personality of Godhead). Allow me to absorb my mind, purified of lusty desires, within the Supreme Lord and to thus give up my life.’

Granting him this permission, Sukadeva and the other sages departed. Pariksit sat down on the bank of the Ganges and settled his mind. He meditated upon the Supreme Absolute Truth with full self-realization, free of material attachments and doubts. His life air ceased to move and he became as stationary as a tree.

As per the local legend, when the time for the curse by Shringi to take effect came closer, the snake-bird Takshaka approached Shukratal in disguise of a Brahmin. On his way Takshaka met another Brahmin called Kashyapa. He asked Kashyapa where he was going in such a hurry.

Kashyapa said he was going to meet King Pariksit because he could save him from Takshaka’s poison. Takshaka was surprised at the confidence of Kashyapa and revealed that he was Takshaka and that there was none in the world who could save anyone whom he had bitten. Kashyapa smiled and said that he had an antidote for the poison.

So to test him, Takshaka bit a green tree and within seconds the tree was turned to ashes. Kashyapa chanted few mantras and the tree was back to life. Takshaka was amazed to see the power of Kashyapa. Takshaka asked him whether he was going to seek rewards from Pariksit. Kashyapa replied in the affirmative. Takshaka said that he would reward him more lavishly than, provided he went back home. Kashyapa then took a lot of wealth from Takshaka and returned.

The place where Kashyapa met Takshaka is known as Bheraheri. It is 7 km away from Shukratal. The place from where Takshaka asked Kashyap to return is called Modna (which in local language means ‘return’). This village later became known as Morna. It is 5 km from Shukratal on the road coming from Muzaffarnagar.

When Takshaka went to the area where Pariksit was, he found that there was no way by which he could get in. He then disguised into a caterpillar and entered one of the fruit baskets being taken to the King's chamber. On reaching the Pariksit, Takshaka came out of the fruit, and took the form of a brahmana and thus easily approached the Pariksit and while he was in meditation and bit him. As everyone looked on in horror, the Pariksit’s body immediately turned to ashes by the fire of the snake’s poison. Thus, Maharaja Pariksit left his body immersed in the Absolute Truth of the Supreme Being, felt no pain as he entered the spiritual realm. 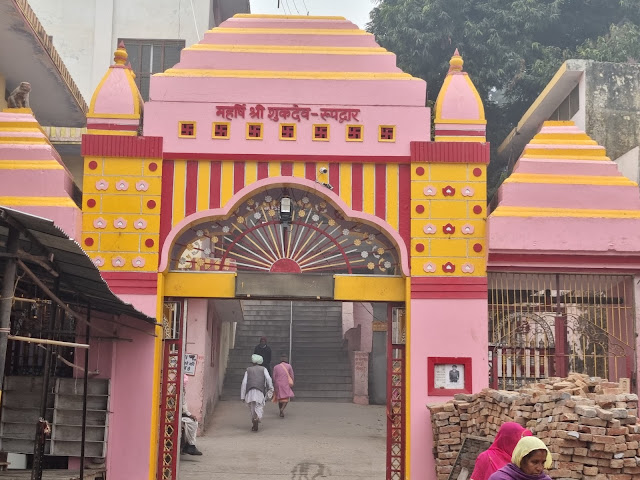 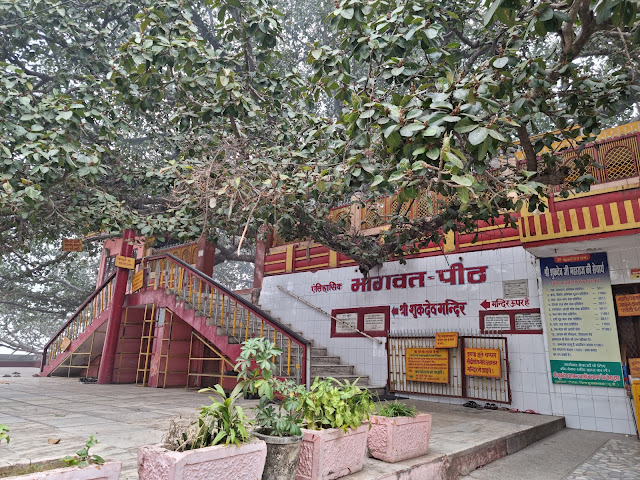 Akshaya Vat Vriksha
Branches of this Akshaya Vat tree spread far and wide, sprouting through the nearby surroundings. Uniqueness of this 150 feet towering Akshaya Vat is that it doesn’t shed any of its leaves. 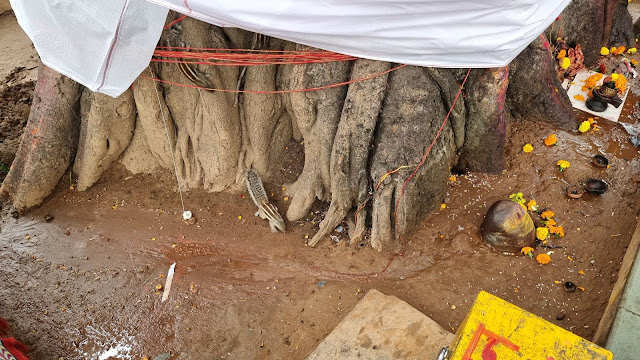 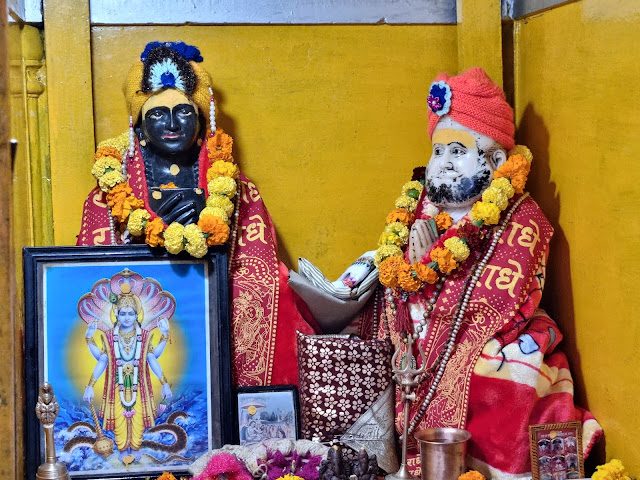 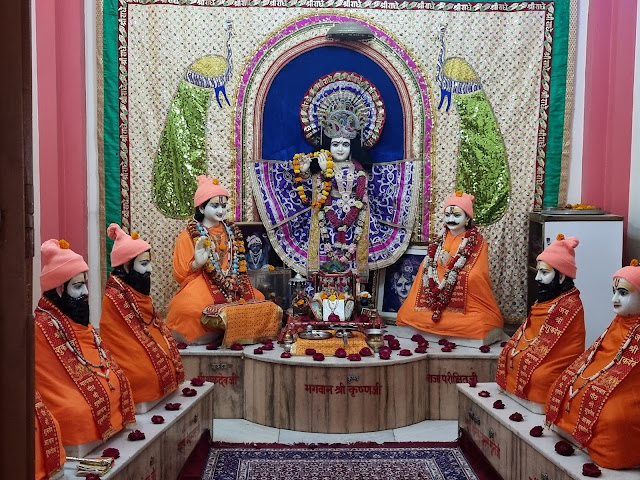 Lord Krishna bestowing His darshans to Sukadeva Gosvami, Maharaja Pariksit and all assembled sages after the conclusion of Bhagavatam narration at Shukratal 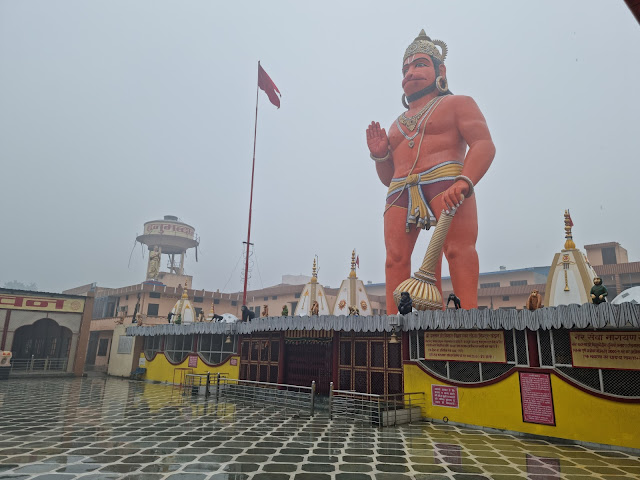 Hanuman Ji
World’s tallest murti of Hanuman Ji at 75 feet high standing outdoors over the main shrine at a Temple in Shukratal. 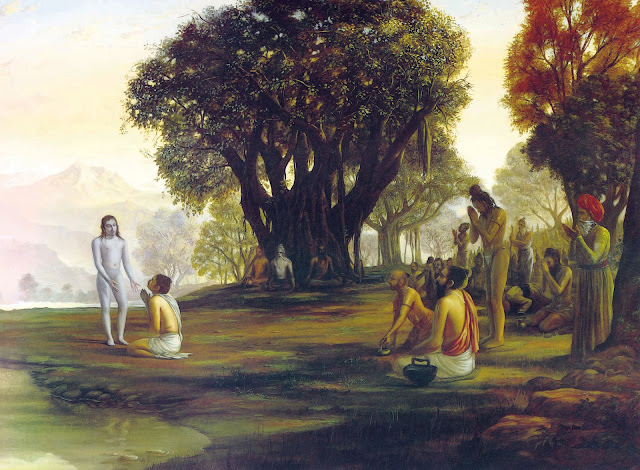 Maharaja Pariksit Accepts Sukadeva Goswami as His Spiritual Master
When Pariksit Maharaja heard that he would die in 7 days due to the brahmana boy's curse, he made up his mind to sit at the bank of the Ganges, fast for the remainder of his life, and concentrate his mind in Krishna consciousness. At that time, all the great-minded sages, understanding the importance of the occasion, arrived there to meet Maharaja Pariksit. Pariksit stood before them humbly with folded hands, and told them of his decision to fast until death. All the great sages praised the decision and decided to wait there with him until he reached the supreme planet. Then, the son of Vyasadeva, Sukadeva Goswami, appeared there. Sukadeva was only sixteen and his beautiful blackish complexion resembled that of Lord Krishna. Sukadeva Goswami was certainly inspired by Lord Krishna to appear before Pariksit, and give him the teachings of Srimad-Bhagavatam. Spiritual master is the manifested representative of the Supreme Lord. Pariksit bowed before him, glorified him and politely inquired from him, "Please let me know what a man should hear, chant, remember and worship, and also what he should not do. Please explain all this to me." (Srimad-Bhagavatam 1.19.38) 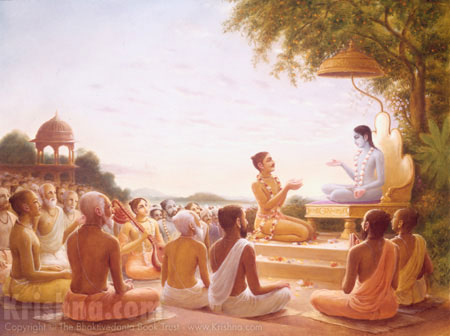 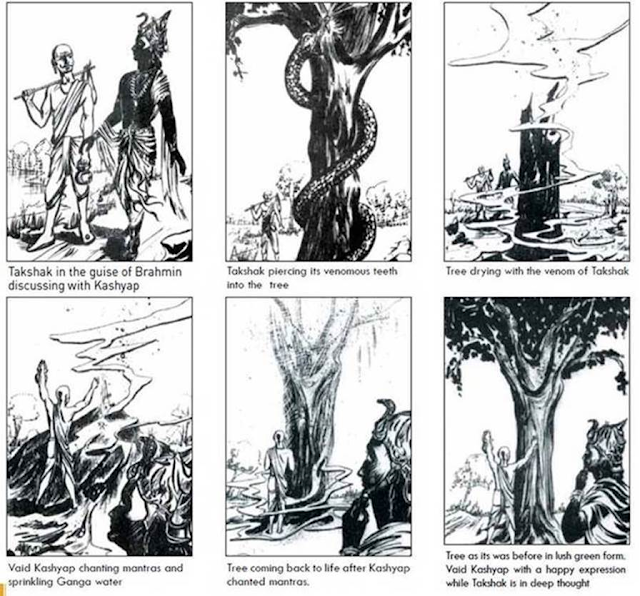 Meeting of Snake-bird and Kashyapa brahmana 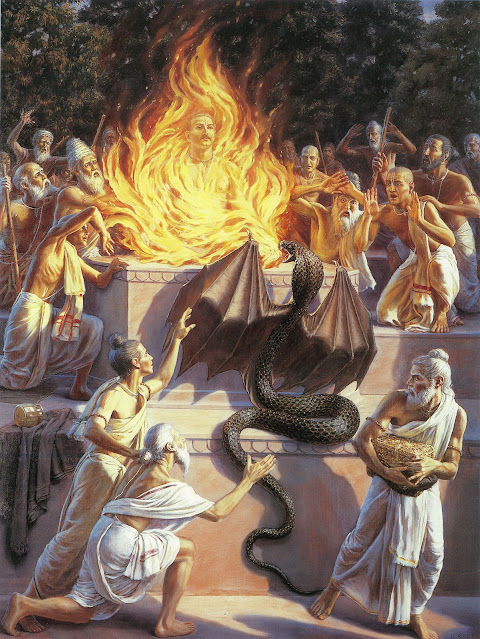 Srimad-Bhagavatam (Bhagavata Purana) is the transcendental science for understanding the Supreme Lord, and that the ultimate goal of life for all human beings is to attain the stage of prema, or love of the Supreme Lord. It is spotless literature not only for knowing the ultimate source of everything but also for knowing our relation with Him and our duty toward perfection of the human society on the basis of this perfect knowledge. It is a powerful reading matter and is meant for the ultimate good of all people.

It is the literary incarnation of Lord Sri Krishna, and concisely and categorically presents spiritually rich topics of Supreme Lord Krishna, His various incarnations and devotees, and the process of loving devotional service (bhakti-yoga) unto Him. Srimad-Bhagavatam has Twelve Cantos that represent the limbs of Lord Sri Krishna’s transcendental body.

It is compiled by Srila Vyasadeva, the empowered plenary portion incarnation of Lord Krishna. Persons who have lost their vision due to the dense darkness of ignorance in the age of Kali shall get light from this Purana.

By a careful reading, one will know the Supreme Lord perfectly well, so much so that the reader will be sufficiently educated to defend himself from the onslaught of atheists. Over and above this, the reader will be able to convert others to accept the Supreme Lord as a concrete principle! Srila Prabhupada emphasizes, “The only qualification one needs to study this great book of transcendental knowledge is to proceed step by step cautiously and not jump forward haphazardly as with an ordinary book. It should be gone through chapter by chapter, one after another.” (Preface to Srimad-Bhagavatam)

Study of the Bhagavatam, done in line with the explanations of bona fide Vaisnava acaryas, gives the sincere reader an unparalleled understanding of the Absolute Truth, which is not possible by one’s own speculative efforts. Srimad-Bhagavatam is declared to be the essence of all Vedanta philosophy. One who has felt satisfaction from its nectarean mellow will never be attracted to any other literature. (SB 12.13.15)

Thus, the holy place of Shukratal is of great importance in connection with the sacred text of the Srimad-Bhagavatam. 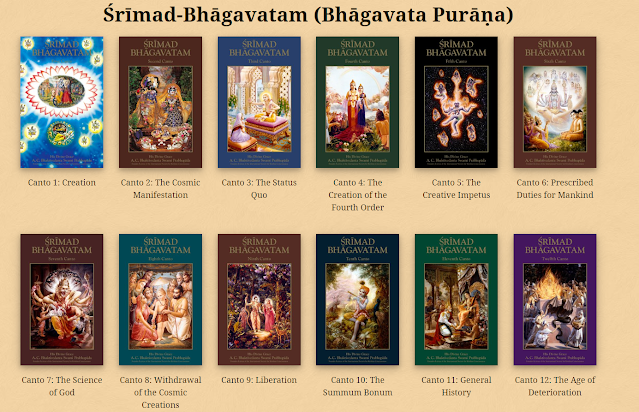 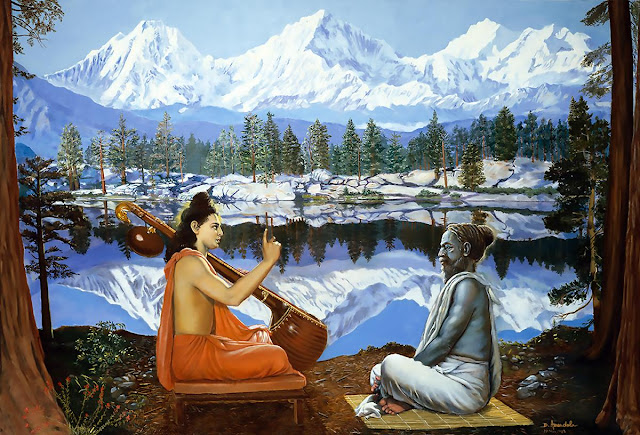